For a limited time only, you can get my Border Lords and Ladies Boxed Set for only 99 cents! 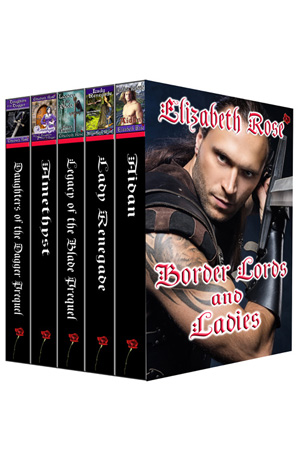 Also, for the next few days only, you can pick up a FREE copy of Judging Judas (Tarnished Saints Series) and The Bounty Hunter (Cowboys of the Old West Series.)

And watch for my new heart logo to appear on all the covers of the Tarnished Saints Series soon!

An ongoing project I’ve been working on is to get all my books in paperback form, as well as update and tweak all my covers. Now available in paperback is my MadMan MacKeefe Series.

Take a trip to the bonnie hills of the Highlands as 3 crazy friends find the unconventional women of their dreams. First, there’s Onyx (secret brother of the Daughters of the Dagger.) With his crazy eyes of two different colors, he takes the English Lady Lovelle captive as he searches the Highlands for the coveted Book of Hours.

His friend, Aidan, sleeps on a rock as a pillow. He is the guardian of the Scots’ coronation icon, the Stone of Destiny. Or I should  say he is guardian until he lets his trust of another Scot, Effie MacDuff, get in his way. She steals it from under him to give to the English to save her sister’s life.

The third madman is Ian. He’s the most mentally tortured of the bunch, and on All Hallow’s Eve he sees the spirit of Tearlach MacTavish in the bonfire. He’s killed and buried this enemy three years ago, but now it seems he’s come back from the grave. To make matters worse, his good friend, Kyla, has been given to this wretched man in marriage by the MacKeefe clan’s chieftain in order to seal an alliance.

For a limited time the MadMan MacKeefe Series is on sale in ebook form for only $2.99. (So is the Legacy of the Blade Series.) Watch my Print Books page for more of my novels now in print, and those coming to paperback soon!