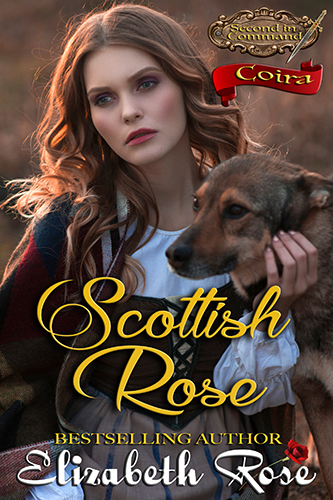 Coira MacDuff is betrothed to the English lord Sir Lance de Selby. But when he takes her back to his castle to be married, she finds that it is the same castle where she was a prisoner of the English and kept in a hanging cage.

(Coira is the heroine’s sister from Aidan – Book 2 of the MadMan MacKeefe Series.)

Lance felt the earth shaking beneath him, and heard his squire’s voice calling out his name. He slowly opened one eye and then the other, having to use his hand to shade his face because a bright light almost blinded him.
“Hold that torch somewhere else, Jack. You are blinding me.”
“My lord, I don’t have a torch. That is the sun,” his squire informed him.
“Don’t be ridiculous. It’s nighttime. There is no sun.” He pushed up to a sitting position to find himself sitting in the wagon in the courtyard of Liddel Castle. And to his astonishment, it was the middle of the day. “How did we get here so fast? Wait. Why is there sun?” He rubbed his aching head, trying to think.
“You’ve been asleep for nearly a day now,” Jack told him. “We weren’t able to wake you when we stopped for the night, and I’m surprised I was able to rouse you at all.”
“Argh, it was that blasted Mountain Magic. The stinking Scots tricked me into drinking it, knowing what it would do to me.” He swung his legs over the back of the open wagon, sitting on the edge.
“The Scots warned ye about the whisky. Do no’ blame yer reckless actions on them,” said Coira.
His head snapped around to see his new wife getting down from the front of the cart and helping her handmaid do the same. God’s eyes, he almost forgot he was now a married man.
He cleared his throat and stood up, still feeling dizzy. “Coira, how do you like your new home?” He stretched out his arm, proud of his new castle, thinking it would impress her. Instead, a shadow covered her face and she clung tightly to the arm of the old gypsy.

Coira looked up to see the walls of her prison from six years ago, and she immediately found herself living in the past. This is where she’d almost died. It was almost as if she could still hear the laughter of Lord Ralston and his men as they tortured her and Effie. This is the last place she ever wanted to be!
“Coira, your husband is talking to you,” said Zara, nudging her in the side.
“Zara, I canna live her,” she whispered, clamping her fingers around the old woman’s arm. “It’s as if I have stepped back in time. There are too many horrible memories within these walls.”
“Get a hold of yourself, Child. Leave the past in the past. This is your home now, and you need to make the best of it.” Zara pried Coira’s fingers from her arm.