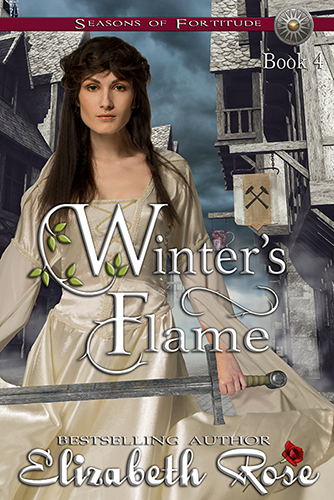 A Lady of the forge and a Border Lord on a dangerous mission are brought together by unusual circumstances in Winter’s Flame.

Martin de Grey had a hard time concentrating on the fact he wanted to kill the blacksmith. The beautiful daughter of the tradesman had taken his interest and now all he could think about was that he had to have her. Never had he seen a girl in the forge. And never in his life had he wanted to bed a common wench the way he did this girl named Winnie.

Her skin was as white as snow instead of browned from the sun like most of the lower class. Her long, black hair was tied up in a knot atop her head with a few stray pieces falling, framing her oval face. It took all his control not to reach out and push away the strand that touched her delicate, pink lips.

With her chin lifted high, she almost seemed to look down her long nose in a regal manner. She held the composure of a noblewoman even though her face was dirty and her clothes covered in soot. When her emerald green eyes met his and their hands brushed against each other mere seconds ago, he felt excitement surge through his body. Aye, he wanted her.

As angry as he was, the girl seemed confident the sword could still be crafted in a timely manner. Did he really have a choice in the matter? Sure, he could kill the blacksmith’s son and the blacksmith, too, but he still wouldn’t have a sword. This man was said to be the best in the land although, by what he was witnessing, he was starting to have his doubts. With the former Lord Ravenscar dead, there was no way to collect on the deal they’d made now. He was about to take his steel and leave when another idea came to mind. It might just work.

“Will you give him more time?” asked the girl named Winnie. Her voice was like the sweet song of meadowlarks as the raging flames of the fire rose up illuminating her body from behind. Such a delicate flower amongst the ashes. She spoke in a proper manner and, as far as he could tell, she still had all her teeth. When their hands touched earlier, he swore he smelled rosewater drifting from her body. He must have been mistaken. Most wenches smelled like ale and sweat. This girl was like an angel amongst the flames of hell. She intrigued him like no other.

“Please, my lord,” begged the blacksmith. “Give me another chance. And please don’t hurt my son.”

“You seem to care much about your children,” he said, still staring at the man’s daughter.

“I will,” said Martin, reaching one hand up to stroke his chin in thought. “You’ll come with me, back to my castle to forge my sword.”

He saw the girl’s bright green eyes light up in surprise.

“That’s impossible,” she answered with no emotion at all in her voice. She was very controlled.

“Because this is Wal – my father’s home,” she said. Her eyes shot over to the blacksmith and then back to him. “This is where he works. Everything he needs is here.”

“I have a smithy at Castle Heaton that is much nicer than this hole in the wall,” he told her. “I also have the most expensive equipment and everything a blacksmith could ever need.”

“If I come with you, will you release my son?” asked Wallace.

“I’ll release him when the job is finished and not before,” he told him.

“Do you promise not to hurt Josef?” asked the man’s daughter.

He chuckled and reached out and cupped her chin in his hand. “You are very bold for a wench,” he said. “But you needn’t worry about the boy because you’ll be there with your father to witness the fact I will treat him fairly.”

“Me?” she gasped and pulled away. His hand dropped to his side.

“Blacksmith, you told me you needed your daughter to assist you.”

“Why not?” Martin turned to see the fear in the blacksmith’s eyes. “She comes along, or you’ll both stay here, and the deal is off.”

“What about Josef?” asked the girl. “Will you return him if we don’t go back to your castle with you?”

He chuckled and shook his head. “Josef was assurance that I’d get my sword. No sword, no Josef. It’s as simple as that. If you two don’t accompany me back to Northumberland, Josef will stay at Castle Heaton forever and you’ll never see him again.”

“I’ll go,” said Winter, having no choice in the matter. Wallace would never be able to make the sword without her. Lord de Grey could end up killing both Wallace and Josef for all she knew. She couldn’t let anything happen to either of them. Josef had to come home. If he didn’t, Wallace would be so heartbroken; he might just die.