From the first page, this book moves at a brisk and adventure-filled pace. . . There are some very passionate romantic scenes which will leave readers a little hot under the collar. This is a very promising addition to the series, and readers will be eager to read more from this talented author. Readers will potentially get through this book in one sitting, a real page turner! 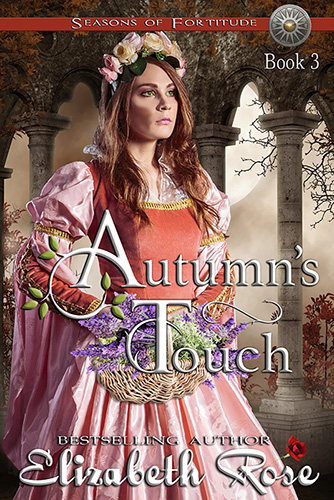 Autumn is a healer who is kidnapped by the dark lord, Ravenscar. This is a medieval re-telling of the Beauty and the Beast.

The ship set sail for Scotland the next morning with Autumn as well as Nairnie aboard. They’d taken with them only what little they could carry but, then again, they didn’t own much. Still, Sir Royce gave them permission to return and collect the rest of their things to move back to Whitehaven afterward.

The guard, Lester, came with them as their escort, while Ardagh stayed behind at Mablethorpe. The mansion had a small garrison that was stationed there to protect the nuns from possible invaders.

“I’m sorry ye had to leave,” said Nairnie, walking up to look over the edge of the rail of the ship as they traveled north up the coast. Lester lingered behind them. The ship was a trade ship owned by Sir Royce, and it was carrying twenty tuns of goods in the hold to trade with the Scots.

“I didn’t have to leave. I chose to leave,” Autumn reminded her, raising her face to the sun and closing her eyes. They’d had quite a few storms lately, so the sun’s warmth on her face felt comforting.

“Ye ken Sir Royce would have made ye leave either way. If ye had remained in yer chamber instead of sneakin’ out to heal the men in the first place, ye might have been able to stay at Mablethorpe.”

Autumn’s eyes popped open. “I will not keep my gift from those in need,” she told her. Then something caught her attention. It was a dark, foreboding castle high atop a cliff overlooking the water. “What’s that?” she asked, thinking how sad and lonely the place seemed. Most castles were whitewashed and had the resident lord’s brightly colored banners hanging from the battlements. This castle was dark and dreary. It had one small pennant that looked to be dark gray or possibly black attached to a tower.

“That’s Ravenscar,” said the guard walking up to join them.

“Ravenscar?” she asked. “That name sounds familiar, but I don’t know why. Tell me more, Lester.”

“Ye dinna want to ken anythin’ about that place or the man who is said to be the gatekeeper of hell.” Nairnie made a face and spat over the rail into the sea as if she were trying to cleanse her mouth just from mentioning the man. “He doesna deserve to live for the horrible things he’s done.”

“What has Lord Ravenscar done?” asked Autumn innocently. She had lived a sheltered life and was not aware of the idle gossip.

“What hasna he done? Dinna ask about it again. ‘Tis better ye dinna ken.” Nairnie blessed herself – something Autumn had never seen her do before. Then she turned and walked away.

“Lord Ravenscar is a dark beast,” Lester told her. “Nairnie is right in what she said.”

“Ravenscar has brought about war on many occasions for no reason other than he didn’t like the way someone looked at him,” Lester continued. His eyes stayed fastened on the dreary castle as the ship passed by.

Autumn chuckled, thinking this was the most ridiculous thing she’d ever heard. “Certainly, you are exaggerating.”

“I’m not,” said the guard shaking his head. “Lord Ravenscar has been known to kidnap the children of his enemies and lock them up in his dungeon.”

“Lock up innocent children?” A shudder ran through her.

“The lucky ones get to be his servants. The others are killed and eaten for dinner.”

She rolled her eyes and turned to lean forward, her arms on the rail as she tried to get a better look at the castle. “That is an old wives’ tale if I ever heard one.”

“He kidnaps women as well. Word has it he . . .” The guard looked around to make sure no one was listening. Then he leaned forward and said in a hoarse whisper, “He ties them up and has his way with them. In bed, if you know what I mean. It’s said you can hear the women screaming out in the night as one’s ship passes Ravenscar.”

“Oh, my!” The wind picked up and she clutched her cloak around her neck, trying to shake the horrible image from her mind.

“It is said Lord Ravenscar likes young women the best. The ones about your age,” said Lester. “Virgins,” he added. “He likes to break them in right.”

“Stop it!” she shouted, clutching her cloak to her body tighter as the ship passed the vacant dock. “You are just trying to scare me. You shouldn’t be talking so freely to a lady to begin with, Lester.”

“Forgive me, my lady,” said the guard with a bow of respect. “I got caught up in the stories. I never would have spoken so freely if you hadn’t asked to learn about that beast of a man.”

“Beast,” she repeated, turning back to try to see more. Up on the battlements of Ravenscar Castle, she spotted a man. He was dressed in a black cloak with the hood pulled up over his head so she couldn’t see his face. The castle was too far away to see anything clearly.

The clouds covered the sun again and a cold wind picked up. It made the man’s cloak whip in the wind around him, almost like wings of a demon. He was one dark shadow. A shadow she never wanted to meet up with as long as she lived. As the ship sailed away, she found herself transfixed, not able to look away from the beast atop the battlements. His back was toward them but, as the ship passed, she watched him slowly turn around. She wasn’t able to see his features, but there was one thing she knew for sure.

He was looking directly at her!