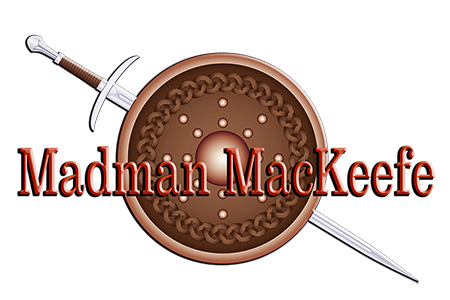 A Scottish Highlander kidnaps an English noblewoman as he searches for a stolen Book or Hours to try to save his mother’s life.

Click to listen to an excerpt of the audiobook of Onyx.

“What’s all the stramash about?” Storm’s grandfather, Callum MacKeefe, pushed his way through the crowd with Storm’s eldest son, Renard, of eight and ten years at his side. The old man spied Onyx lying on the ground and shook his head. “No one dies in my tavern. He’s probably just knocked out from my Mountain Magic, as it has a way of doin’ that to the meek ones quite often.”

“Da, is he dead?” asked Renard, pushing a stray strand of red hair from his face. His cheeks were flushed from drinking with the rest of them. It seemed like just yesterday that he was only a boy.

Storm bent down to examine Onyx, pulling the man’s green and purple plaid from his shoulder and opening his saffron leine. He looked at Onyx with his tousled shoulder-length, black hair and the rugged stubble on his face, the image of a true MacKeefe Highlander.

Onyx’s eyes stared straight up at Storm, but not once did he blink. One eye of orange, and the other of black, Onyx had always been feared as a demon by those who didn’t know him. It was an eerie sight, and unsettling to say the least.

Storm leaned over and placed his ear against his drinking partner’s chest, listening for a heartbeat. The place was noisy, but if there was a beat, he couldn’t hear it. Then he reached under Onyx’s nose, feeling for breath. When he found neither he just shook his head sadly.

The crowd became noisy, the patrons talking amongst themselves. The concern in their words echoed the same in Storm’s own heart. Onyx’s demonic-looking eyes were opened wide, and sent a shiver through Storm’s body. He never had gotten used to looking at the lad, even after all these years.

“Aye,” he said sadly shaking his head and getting to his feet. “Onyx MacKeefe, the poor laddie, is stone-cold dead.”

“Let me through,” shouted Fenella, making her way to her son who was prone on the floor. Onyx’s two best friends, Aidan and Ian followed right behind her.

“Dagger, get up,” said Aidan, getting down on his knees and shaking him. He used the name for Onyx that his close friends called him, because he always had his gemstone dagger at his side. Onyx’s dagger had a black onyx stone with a crazy orange crack, the same colors of his terrifying eyes.

“Aidan,” said Ian, putting his hand on his friend’s shoulder. “He’s dead. ’Tis too late to save him.”

Ian was taller than Aidan and had dark hair, while Aidan was blond. They both were two of the sturdiest, strongest men of the MacKeefe Clan. Their muscles and physiques always got them more women than Onyx, though Onyx’s build was not a shabby sight. But because of his terrifying eyes, Onyx’s friends often had to pay whores to bed him, as no respectable woman ever wanted to be near him.

“Nay, ’tis no’ too late. Ye dinna ken how to do it, that’s all,” said Fenella, reaching out the toe of her shoe and putting it under her son’s body. She nudged him slightly, but nothing happened.

“I’m so sorry,” said Ian, putting his arm around the woman. “Dagger was a guid man.”

“Aye,” said Aidan, trying to hide the fact he wiped a tear from his eye. “Our best friend.”

“Ye dunderheids! Both of ye. Ye really ken nothin’ of yer best friend. Onyx, get up off the floor before ye catch a draft.” Fenella actually kicked him this time, getting a gasp from the crowd.

“Fenella, how can ye be so heartless?” asked Storm, “To stob yer toe on yer own dead son?”

“That was no stob, that was a quick, swift kick, Laird MacKeefe,” she told him. “And had he fallen on his face, I’d have kicked him in the doup.”

“Bid the devil, I tell ye he isna dead,” she protested. “Give me a stoop of ale someone. Quickly.”

“Da?” asked Renard. “How can she drink at a time like this?”

“I dinna ken, Son,” Storm answered with a shake of his head.

A serving wench handed her a pitcher of ale and she took it with both hands.

“’Tis no’ for me,” she told them. “’Tis for my son.” She dumped it over and emptied it on his face, then dropped the metal pitcher atop his chest. “Get up ye galoot and show them ye can hold yer whisky. Get up, I say.”

“Heartless,” said someone from the crowd.

“I canna even believe this,” mumbled someone else.

The crowd started getting louder, not liking what the woman was doing. Storm had to raise his hand to quiet them down.

“Haud yer wheesht!” he called out so everyone could hear him. “Ye’re being loud enough to raise the dead.”

Then Onyx’s pet Scottish wildcat kitten slipped through the crowd and started licking his face. It was not a safe pet to have, but Onyx had loved to live a risky life. It jumped atop his chest and settled down and curled up as if it were going to take a nap.

“Fenella, I dinna think . . .” started Aidan, but the woman just held up her hand.

“Give it a wee bit of time,” she said, and the entire room quieted down at her words and watched in eager anticipation.

Then, Onyx suddenly sputtered and gasped and coughed, trying to regain his breath. He grabbed the cat atop him, his eyes wide and crazed as he started to shake the animal.