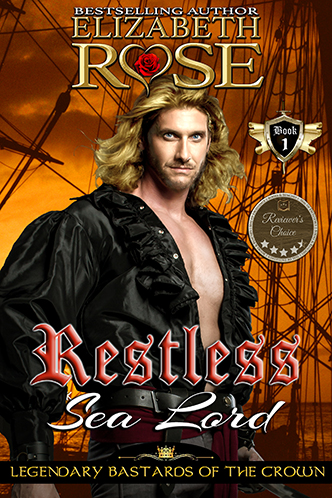 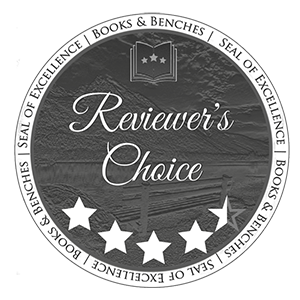 Rowen the Restless, one of the bastard triplets of King Edward III vows vengeance on his king – the man who sired him and wanted him dead.

Now Rowen is a pirate and in the midst of a raid against the king, he’s taken Lady Cordelia of Whitehaven captive aboard his ship.

Can a pirate and a lady have a life together since they both have royal blood? And will the king claim his bastard sons? Or is blood not thicker than water after all?

Cordelia was about to object when Rowen reached out and took her hand and pulled her along with him. He gripped the bottle of rum in his other hand as he made his way to the hatch that she supposed opened to the undercroft of the ship. Her feet were bare since she’d removed her shoes when she’d changed, and this caused her to slip on the deck as the ship tilted again. He pulled her against him while he opened the small door to the hold. Then he ducked his tall frame and entered, and started to descend some steps.

“You’re takin’ her with you?” asked Odo in disappointment.

“I am, and not a one of you will follow,” he told them, heading down the stairs.

Cordelia’s gown was long and the ship rocky, and though he’d descended into the depths of hell like a sure-footed goat, she stopped and tried to grab for something to help her keep her balance. It was of no use since there wasn’t a railing or rope of any sort.

“Come on, my lady,” he said looking upward and holding out his hand. It was dark and musty down there, and if she wasn’t mistaken, she thought she saw him standing ankle-deep in water.

“Nay. I can’t.” She shook her head, feeling like vomiting again.

Before she could object, he put his hands around her waist and lifted her into his arms.

“Please, don’t put me down in the water,” she begged, not knowing what sort of evil dwelled within it.

“I don’t plan on letting you ruin the only dry gown we’ve got.” He carried her in his arms toward a stack of crates and deposited her atop the largest one. She recognized the crate as one of her father’s. His hands lingered on her waist, and hers rested on his shoulders. Their eyes met and through the light from the open door of the hold, she noticed a kindness and softness in his eyes that hadn’t been there before. Then he looked at her lips, and she thought for a moment he was going to kiss her again. She wouldn’t have objected, and this made her realize her mind was muddled from her harrowing experience today. What was the matter with her that instead of planning her escape, she was wondering if she’d experience another kiss from the infamous Rowen the Restless?

He cleared his throat and stepped away, and with him went the warmth from his hands and also her silly daydreams.

“So tell me, Lady Cordelia, why aren’t you swooning or crying like most women would in a situation such as this?” He dug around for something in the hold, his head dipping down between the crates and barrels. The ship creaked and moaned as it rocked in the waves, and she heard the water on the floor of the bowel of the ship swishing back and forth. Looking upward, she could see the cause of the water. The deck above them had slight spaces in between the planks. Sunlight filtered through, splashing stripes of light over the cargo in the hold as water dripped down into the underbelly of the ship. The walls didn’t seem to be watertight either.

“Would that change matters any if I cried?” she asked, trying to stay strong. She wasn’t one to break down easily, but it was warranted in such a dire situation. Still, if she cried it would only make her look weak in his eyes, and that would give him the advantage. She needed to stay in control of her actions if she were going to get out of this alive and unscathed.

“It might.” He found a crowbar and lifted up his head. “That is, if you cried, I might think you needed my protection from the crew more than you actually might believe you do right now.”

“Oh, I do need your protection!” she exclaimed, not wanting to think about what would happen to her if he left her alone with the men. “And although I’m furious that you abducted me, I also want to thank you for protecting me from those lusty men.”

He cocked a side grin, and his blue eyes drank her in. “They aren’t the only ones feeling lusty.” He continued to use the crowbar to pry a lid from a barrel.

She felt her cheeks burning at his comment and wondered if her face were turning red right now. She had to say something before he started to have not-so-moral thoughts about her. “I’d also like to thank you for protecting my virtue.”

He laughed at that, and his deep chuckle filled the belly of the ship. “Listen, Lady, you seem to be forgetting where you are. You’re on a pirate ship loaded down with men who would slit your throat in your sleep or roger you at the rail without thinking twice. Virtue means nothing, nor does it exist aboard the Sea Mirage.”