(Click on covers to buy in Ebook, Print or Audiobook)

Storm MacKeefe, the wild Scotsman is being paid to hunt down and capture the leader of The Renegades. But he has no idea the leader is a woman.

Wren has been blinded in the midst of a battle between the English and Scottish years ago. She now leads a band of renegade women.

When Storm is captured by Wren instead, things get interesting. The battle between the English and the Scots is never quite over in Lady Renegade. 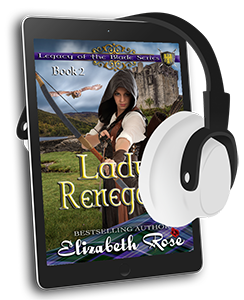 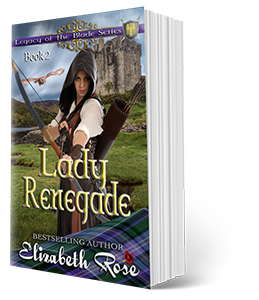 “Why dinna ye light a candle?” he complained. “How can ye see what ye’re doin’, ’tis so dark in here?”

“I’m used to the dark,” she replied, and got to her feet. “Besides, I don’t use candles unless absolutely necessary.”

“Losh, lassie!” exclaimed Storm, shaking his head in disbelief. “Dinna tell me ye dinna even want to use a tallow candle because they’re made from animal fat?”

“You’re a prisoner,” she snapped. “Watch how you speak to me, or I’ll make you suffer.”

“What do ye call this?” he asked. “My throat is parched and ye’ve yet to offer me a dram of whisky.”

She stood still for a moment, almost seeming to contemplate the request. Then she answered him. “All right. I’ll get you whisky. But I assure you, you’ll never ask me for it again.”

Storm thought it a strange response, as he couldn’t imagine why she would think he would ever decline the drink of which he was so fond.

Wren placed her owl on her shoulder, and made her way to the exit. As the door squeaked open, it once again revealed sunlight and freedom, before closing and leaving Storm in darkness and despair.

Hurriedly, he worked on his escape, hoping to be out of the shackles before she returned. He had been in many a threatening situation before, but always managed to escape. In fact, he prided himself on being the best escape artist in all of Scotland, mayhap England as well.

Stretching his fingers, he managed to reach and untie the leather laces that bound his boots around his legs. Squirming his feet around inside his boots, he quickly slid one foot upward and then the other, until his bare feet were free and rested upon the pine needles. He chuckled as he eyed his limp boots that were still shackled together.

“Willna Morganna be surprised to see this?” he spoke to himself as he twisted around in the chair, bringing his toes up to help loosen the ropes that bound his body. With a few more tricky twists, and with the help of his shackled hands and strong teeth, he managed to free himself. The ropes dropped to the ground and he breathed a sigh of relief.

Quickly, he rose to try to get the feeling back in his legs before attempting to walk or free himself of the shackles still encircling his wrists.

The light of day caught his attention once more as Wren pushed open the door and entered the room. Storm hurriedly sat back down pretending he was still tied up, trying to decide what to do next.

“I brought you a candle,” Wren said as she placed it on the table in the center of the room. Then she put her owl on a wooden perch nearby that Storm hadn’t even noticed was there. She still hadn’t looked directly at him, but if she did she would see his escapades since the flickering candlelight well lit the underground room.

“Beeswax?” he asked, realizing no stench from tallow permeated the air.

“I’ll allow no other kind among my army.”

She pulled a pouch from under her arm, and poured what smelled like whisky into a wooden goblet she retrieved off the shelf.

“Do my eyes deceive me or is that an animal bladder that holds yer whisky?” asked Storm.

“The animal was dead when I found it,” she explained. “A poacher shot it before I managed to scare him away.” She turned abruptly toward Storm and marched directly for him. Holding out the goblet, she offered him the drink.

Storm sat motionless for a moment, not sure why she hadn’t even acknowledged the fact he was sitting on the chair untied, barefoot, and working on removing his shackles.

“My many thanks.” He carefully chose his words, using both hands to take the goblet while he studied her face. There was something strange about the whole situation. She never really looked straight at him, and hardly ever blinked. Of course, it was still a bit dark in there and he could be mistaken, but only a blind person could not notice what he had done.

“You asked for it, now drink it,” she commanded. Without waiting, she quickly turned away and walked over to pet the owl that had fluttered silently to the table and was now eyeing him suspiciously.

“Ye dinna have to tell a Scotsman to drink.” He held the goblet to his lips and greedily gulped down the liquid.

Wren half-turned her head waiting for a cough or a gag from her prisoner after the potent hellfire she had just served him. She had used this trick many times on guards before she attacked the English camps. The potency of the liquor alone had made many a drinking man fall into an unconscious state for long periods of time.

“Blazin’ fires of hell!” cried Storm through a raspy voice.

Wren smiled knowingly, expecting to hear, at any moment, the goblet falling to the ground as he passed out.

“I havena tasted whisky like that in a long time.”

Wren’s eyebrows dipped as she turned away from the owl and curiously headed in Storm’s direction.

“What do you mean?” she asked.

“Losh me! What a grand uisque baugh. Aye, this whisky is truly the water of life.”

“Have another sip,” Wren coaxed, guessing he hadn’t yet tasted enough to affect him.

“Because my cup is empty.”

“My grandda used to make a mountain magic that tasted just like this,” he exclaimed excitedly. “I used to drink it since I was a bairn, barely able to walk. When my grandda disappeared, I was sure his secret brew died with him. Tell me, where did ye get it?”

“Never mind that.” Wren quickly made her way toward the bladder of whisky lying on the table. “Mayhap, you should have some more.”

She walked back to his chair and held it out for him to take. When he neither answered nor grabbed for the bladder, her arm lowered to her side and she cocked her head like a bird of prey listening for its victim.

Suddenly from behind her, Storm brought his shackled wrists over her head, clasping her arms tightly to her sides so she couldn’t move. The bladder of whisky slipped from her hand into the pine boughs at her feet.

“No wonder ye dinna need a candle,” he whispered into her ear, sending a flaming shudder up her spine. “Ye are blind