Lady of the Mist, Book 4 – Legacy of the Blade Series

(Click on covers to buy Ebook, Audio or Print)

Garrett is a baron of the Cinque Ports fleet, and has sworn allegiance to King Edward III to keep the channel safe from marauders. But when he stumbles across the pirate ship that has been evading him, his life changes.

Echo is the daughter of an infamous pirate and raised as the son the man always wished for. When an incident at sea leaves a man stranded aboard their ship, she realizes he has ties to her past and she needs to help him escape.

A nobleman and a pirate set out on an adventure that is bound to steal their hearts and hold them prisoner to each other in Lady of the Mist. 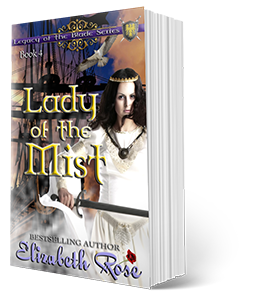 Excerpt from Lady of the Mist:

Garrett watched in disbelief as the wind hit their single square sail head on and sent his ship backwards away from the vessel he now stood upon. His archers opened fire from the castle decks, but the strong winds sent their arrows off course. While several landed on deck, not a one hit its mark. He feared for his men in the storm and now he feared for his own life as well. He stood alone amiss a band of cutthroats that would most likely kill him before they’ve had their breakfast.

“Damn!” The ships separated so quickly in the storm that he knew there would be no retribution for these pirates now. He could only hope Silas headed the ship for Great Yarmouth as he’d instructed, and not be capsized in the storm.

He turned and raised his crossbow as two of the crew rushed him. He managed to loose one bolt and it grazed the shoulder of a man who cried out. The weapon was too bulky and the windlass too slow to load quickly and he threw it down and pulled his sword from his side instead. But before he even had a chance to use it, someone from up above dropped atop him, knocking him to the ground.

“Ye killed m’ bird!” came a high voice in his ear. His sword was knocked out of his hand from the impact, and he reached for the dagger at his waist instead. The attacker’s small hand reached out in a strong grip, digging his nails into Garrett’s wrist, trying to make him release it. The edge of the man’s sword rested against his throat as the rest of the rowdy crew came forward and urged the man on.

Garrett managed to unarm the man, and in the tossing of the ship from the waves, their bodies rolled together over the deck only to be stopped by the planking of the ship’s wall.

He didn’t understand why none of the rest of the men stepped in to seize him. Instead, they almost found it amusing to watch him and this young man struggle.

He managed to pin his attacker to the ground, and hold his dagger to the man’s throat. The pirates behind him laughed and shouted in the pouring rain. Water dripped down off his long hair and hit the pinned man in the eyes.

The men laughed behind him, and Garrett now thought he understood why. This man’s voice was high and his body small, but if his instincts served him right, he’d been fooled. He yanked the man’s cap from his head and ebony tresses spilled around his captor’s head. As he looked closer at the man’s face through the dirt and grime, he realized this was not a man at all, but a woman!