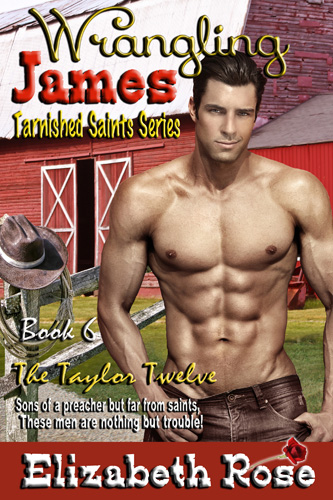 I know a lot of you have been waiting patiently for Wrangling James – Book 6 of my Tarnished Saints Series. Well, I’d like to show you the new cover, and let you know the book is scheduled for release this month – targeted date being Novemeber 17th.

James Taylor is a twin to his lawyer brother, Zeb. He’s a rancher who’s sold his ranch and moved back with his horses to his hometown of Sweet Water, Michigan. He’s not had a great track record with women, and has a problem telling them ‘no’. When Mindy MacAllister comes to live with her grandfather on the farm where James works, things heat up. But Mindy has a daughter and also a secret tainted past that’s sure to destroy their relationship and push James away, when all she wants to do is move closer into his protective hold.

The Taylor Twelve: Sons of a preacher but far from saints, these men are nothing but trouble! 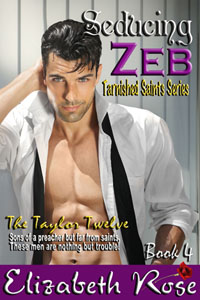 And from now until Sunday only, you can get a copy of James’s twin brother’s story – Seducing Zeb – Book 4, for only 99 cents! But hurry, because this is a limited time offer.

Watch the book trailer video for the first three books of the series. A second book trailer featuring books 4-6 is coming soon.

Also, later this month, I’ll be joining together with eleven best-selling, award-winning medieval authors for our 12 Lords A Leapin’ Christmas Hop, where you will have a chance to win medieval books and prizes from some wonderful authors. More details to come.