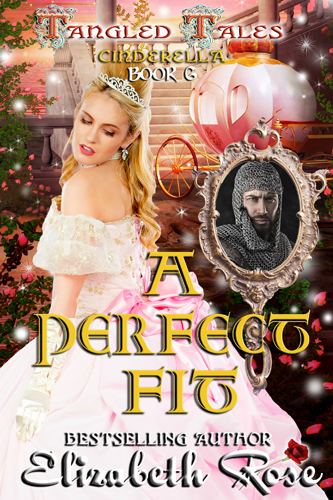 Ella de Bar’s curse has taken her memory and now she can’t even remember William Fremont, her past love. Will a forgotten love be rekindled before it is gone forever?

Excerpt of A Perfect Fit

“You there,” came a deep voice from behind her. It was her stalker from the shadows. He’d been following her for the past hour, she was sure of it. Her heart picked up a beat. The sound of his boot heels clomping on the wooden walkway in front of the butcher’s shop echoed in the night. His pace quickened. She had to move faster!

She crossed the street, not able to see much in the fog. It was getting difficult to find her way in the dark. The laughter of whores from the nearby tavern told her she was nearing the stable. In a sense, it made her feel relieved but, at the same time, very nervous. Where there were whores, there were drunken men, and she’d had her fill with that already tonight. Her boot got stuck in the muddy road, causing her to fall and soil her gown. Things were going from bad to worse.

The haunting wail of a dog in the distance caused a shiver to run up her spine. Why had her stepmother insisted she finish her chores before sending her to town? Because of it, she was far behind schedule. It was much too late to be out without an escort. She needed to get home immediately.

As she struggled to stand, sinking into the rut in the road, she felt two strong hands slip under her arms and pull her to her feet.

She would have been happy about it if she hadn’t recognized the voice as the man who had been following her. She gripped the travel bag tightly in both hands and swung it around, hitting the man square in the chest. Then she took off at a run again.

“Cinderella, wait!” shouted the man from behind her, frightening her that he knew her name. “Ella, please stop!”

The sound of his voice lodged in her brain when he’d called her Ella. Her family called her Cinderella. She didn’t have any friends, so no one called her Ella. However, she found herself somewhat liking the name. For some reason, it seemed familiar – as if that was what she should be called.

A faceless person flashed through her mind. It was almost as if she remembered hearing this man’s voice, or perhaps knowing him somehow. The fog became thicker, and she shook her head in frustration. She couldn’t be sure of anything anymore. This whole night was like a dream. Nay, it was more like a nightmare. Ever since she slipped on the wet floor and hit her head months ago, she hadn’t been able to remember anything from the past. Her memories were stripped from her, leaving her feeling naked and vulnerable. Ella’s life had changed forever.