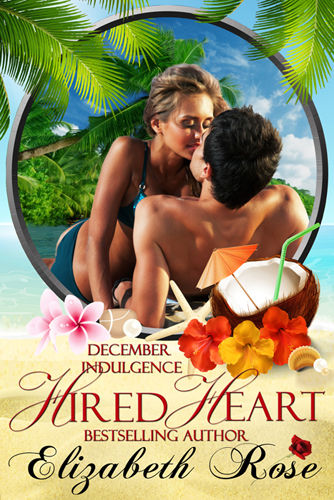 Samantha Forester  books a trip for her boss to Aragon Island to inspect the new villas his eco-friendly construction company has installed.

But what he doesn’t know is that she’s also booked fantasies for both of them at the Indulgences Resort over the Christmas holiday.

Can a Scrooge of a man who hates Christmas change his ways before he loses the perfect girl?

Sam followed Max across the beach and up toward the newly constructed energy efficient villa. She’d heard every word exchanged and hoped Simon wouldn’t return before morning. This was her chance to be alone with Max with no distractions. She would take Aunt Cappy’s advice and get to know him better.

“Wait up,” she called out, hurrying to catch up with him. “Isn’t this exciting? We’ll be the first guests on the island to spend time in the new eco-friendly villa.”

“I guess it’ll be a good chance to work out the bugs before the places are rented out,” he said.

They got to the door and he held it open for her, letting her enter first. She knew the layout and plans for the villas, probably as well as Max. She was very familiar with the project, but he didn’t know that. She wasn’t sure if she should act dumb or match him with his knowledge.

He let out a low whistle and her heart skipped a beat. She figured he was staring at her backside. Her suit wasn’t a thong but showed off her body just that same. “Like what you see?” she asked playfully.

“Love it,” he answered and she turned around to see him staring at the ceiling. That whistle hadn’t been directed toward her at all.

“Just look at those skylights,” he said, staring out the windows. “It sure gives you the feeling of being right out in the open.”

“It does, she said, feeling perturbed that his interest was directed toward the building only.

“The solar panels will make the climate control perfect in here. I’ve also put in the wind turbine for extra energy to run the fridge and air conditioning. This villa is a straw bale house built with loam earthen plaster. On another hut, I tried the rammed earth construction,” he said, walking around looking like a kid in a candy shop as he inspected every little thing. “Of course, I don’t expect you to understand the process.”

“Oh, really?” She crossed her arms over her chest, no longer able to stay quiet. He must think she was nothing but a mere secretary that booked meetings, trips, and got his coffee. Little did he know, she’d spent hours and hours researching what the company did before she even applied for the job.

“Did you use pulped recycled paper for roof insulation on this villa or was it cellulose insulation, instead? And I guess the big rain barrel I saw out back is being used for the toilet as well as watering plants.”

She walked around inspecting things now. He stood there with his mouth open, watching her. “Low energy light bulbs. Good,” she said, clicking a lamp on and off. “By the looks of the walls, I’d say you used non-toxic, lead-free paint.”

“That’s right,” he said, sounding excited that she knew so much. “Any wood you see was harvested from naturally fallen trees taken from the rain forest on the main island. Very little wildlife was disturbed in the process.”

She walked over to the sink and turned it on. “Just look at the water pressure. I guess that turbine is doing its job to pump the water.” She pulled open the door of the refrigerator to see large shrimp and two thick rib eye steaks. “Oh, Max, you won’t miss the surf and turf tonight after all.”

“Great,” he said excitedly, eyeing up the food. “This will give us a chance to try out the new solar-powered grill I had installed.”

Max came up behind her and put his hand on the open fridge door as he leaned over to peer inside. She liked the feel of his body brushing up against hers. The scent of his spicy cologne drifted from his body and made her want to press her face up against his.

“Why don’t we celebrate the completion of this project with some champagne?” he asked. He grabbed the chilled bottle from the fridge and took it over to the two champagne flutes sitting on the counter.

“I’d like that,” she said, closing the door. The cold air against her semi-naked body made her shiver.

“You’re cold,” he said, looking down to her chest. When her eyes followed his gaze, she realized her nipples were protruding from beneath the material of her bikini top.

“I guess it’s evident,” she said and looked back up to see Max twisting the cork on the bottle. He didn’t pay attention to what he did, but rather kept his eyes focused on her chest. Her gaze dropped down to his groin to see his hardened form tenting up beneath his shorts. “It looks like you’re hot.”

A loud pop startled them both as the cork propelled out of the bottle and shot across the room. Champagne bubbled up and ran down the neck of the bottle. Max put his mouth over the top, trying to catch the champagne. When it went all over his face, they both laughed.

“So much for keeping the place clean.” He poured them both a glass and handed one to her.

“I guess you could say we’ve christened the new villa,” she answered with a giggle.

“Not yet,” he mumbled, his eyes darting over toward the bedroom.