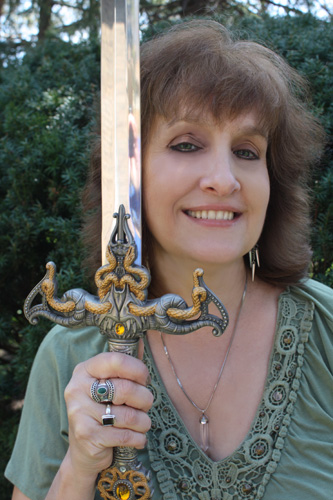 Elizabeth Rose is the author of medieval, paranormal, fantasy western, and contemporary novels. While based on romance, her novels have complex plots, action and suspense. She loves writing bad boy tortured heroes and empowered feisty heroines.

Her books have won rave reviews, and have been seen on The History Channel as well as Wild Chicago. She has been a Sapphire Award finalist, and been nominated by Romantic Times for a Reviewer’s Choice Award.

She is a multi-time RONE Award Finalist, and also a Wishing Shelf Awards, Raven Awards, and International Digital Awards Finalist. She also won the Raven Awards for her book, Highland Spirit!

Elizabeth has been a freelance artist and photographer, and has designed nearly all her own book covers.

She enjoys gardening and sitting in her writing hammock in her secret garden during the summer to write her many books.

Her series consist of:

The Legacy of the Blade Series

Daughters of the Dagger Series

Cowboys of the Old West Series

Once Upon a Rhyme Series

Barons of the Cinque Ports Series

Legendary Bastards of the Crown Series

Secrets of the Heart Series

Elizabeth’s trademark is a rose on the cover of each of her books to let you know it is her work, since there are other authors by the same name. She also ends each novel with the title of the book being the last words of the story. She has new releases every month or so, and more books in the planning so please keep checking back to see what is new.